The effects of forces between bodies such as changes in speed, shape or direction

Effect of changes in speed

When an object is stationary it has an equal force pushing down and up. The downward force, being gravity, and the upward force being the surface the object is on. The object is not floating but it is not sinking into the ground either.

When an object is decelerating it has the equal upward and downward forces as well as forward and backward forces, but the backward force is larger than the forward one, slowing the object down.

Effect of changes in Shape

Effects momentum. Force = change in momentum / time taken. An example of this is crumple zones in car decrease the force on the passengers.

Effect of changes in Direction

Different types of force such as gravitational or electrostatic

Various types of force:
*the last three forces are non-contact, they can act without touching an object
Scalars have magnitude (size) while vectors have both magnitude and a direction.  For example velocity is a speed in a given direction (Vector).

1.11  distinguish between vector and scalar quantities

Force is a vector quantity

Force is a vector quantity because it has magnitude, it is measured in newtons but it acts in a direction. For example 3N drag is an amount of force acting backwards.

Another example is, weight is a force with magnitude, and it acts downwards. It is a vector, and you would normally use an arrow pointing downwards with its magnitude ("xN" N being the unit-Newtons) to represent it in a diagram.

The resultant force of forces that act along a line 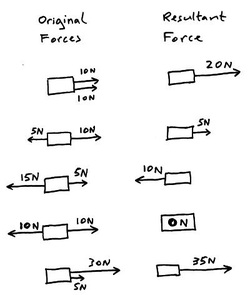 Force forces act along a line, meaning they are collinear. You can add the forces together like scalars. For instance if two forces are acting on a box, both pushing towards the right side, one with a force of 4N and the other with 6N, then 4N+6N=10N (resultant force). So a total of 10N is acting on the box, pushing it to the right.

Friction is a force that opposes motion

1.15 Know and use the relationship between unbalanced force, mass and acceleration.

1.16  know and use the relationship between weight, mass and g

weight = mass x g (W= M x G)
g = gravitational field strength, the gravitational force exerted per unit mass at a point in the field, it is a vector quantity. unit= N/kg
on earth, we consider g as 10N/kg, or g = 9.8 m/s2 but we use g = 10 m/s2 this is how an object in the Earth's gravitational field would accelerate if it was free fall-without friction (this doesn't happen in the real world).
( to explain how we get to this: a= F/m = mg/m = g )

1.18  describe experiments to investigate the forces acting on falling objects, such as sycamore seeds or parachutes