A distance time graph is a graph that shows the relationship between distance travelled and the time taken.

Here, distance isn't increasing as the gradient=0, thus, speed=0 , object is stationary (not moving). A straight line is a stationary object: because time is still going forward but the object is not moving up or down the distance axis.
This video will help. To get a speed see how much up it goes for across. (the graph in the video below goes two up for one across, that's two meters per second (2m/s). 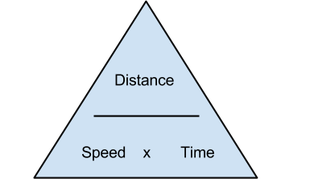 It is important to know and use the relationship between average speed, distance moved and the time taken: Average Speed = Distance Moved / Time taken

Acceleration = change in velocity / time taken  (a= v-u/t)
Where v=final velocity
u=initial velocity and
t=time
Plot the time taken for a toy car to travel and plot a distance time graph. Then repeat at different speeds and compare the different graphs.

Or, use a ticker tape; this makes a mark every second on the tape. If you attach the car to the end of the tape, its speed will be recorded: distance/dots = speed. For example, if you has 50 dots on a meter tape then it traveled at an average speed of (1/50) 0.02 meters per second.
EXAMPLE:
- Put a ruler on a table
- Give the toy car a push so that it will travel next to the ruler
- every five seconds record the distance that the car is on the ruler (starting with it at 0 seconds, the car was at 0cm)
- Draw a graph with time along the bottom and distance up the side
- At each five seconds interval plot the distance the car was at

Average speed = distance moved / time taken (V = D/T), as shown in the diagram I have produced above.

1.7  determine acceleration from the gradient of a velocity-time graph

On the Y axis of a distance time graph is velocity- speed travelled in a give direction. On the X axis is time taken from start. Note that negative velocities mean something is travelling in the opposite direction to that of the positive velocity.

A straight line is a constant velocity: you are travelling at one speed in one direction. 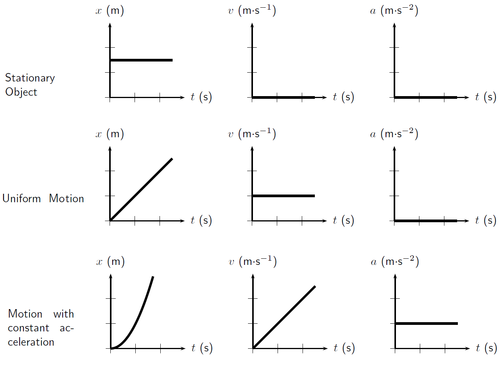 1.5 know and use the relationship between acceleration, velocity and time:

EXAMPLE Q: “8 Miles is travelled in 40 minutes, what is the speed in m/s?” - Convert the miles to metres, and minutes to seconds.

1.4 describe experiments to investigate the motion of everyday objects such as toy cars or tennis balls

The gradient of a line on a velocity-time graph represents the acceleration of the object.

Acceleration is measured in meters per second per second: m/s/s or m/s².
This means we need to find out how many m/s are travelled every second.
Which is the same as "change in velocity / time".
We can work this out by looking at a time period in the graph and seeing how much the velocity changes. For example on this graph between second 3 and second 4 the velocity changes from 0 to 4: meaning that it changes 4 m/s every 1s
4/1= 4m/s²
So effectively you do 'up' divided by 'across' to give acceleration.

1.8 determine the distance travelled from the area between a velocity-time graph and the time axis

The area under a velocity time graph = distance travelled.

The distance can be calculated by finding the area between the velocity time graph (line) and the time axis. If you look there is a shape formed between the two lines, find the area of this using the measure given on the sides
e.g. The width of the triangle is 4 seconds and the height is 8 metres per second. to find the area  of a triangle is 1/2 x base x height so 1/2 x 8 x 4= 16

Where next? Trending pages on OxNotes 🔥