2.2 recall the positions of metals and non-metals in the Periodic Table

From left to right across a period there is a gradual change from metal to non-metal elements. For example, in Period 3, sodium, magnesium and aluminium are metals. They all conduct electricity and their oxides are basic. Phosphorus, sulphur, chlorine and argon are non-metals, They are all poor conductors of electricity and the oxides of P, S and Cl are acidic. Silicon has some properties of both a non-metal and a metal, so is therefore called a semi-metal or (metalloid). Silicon is a semi-conductor of electricity and is used in computer chips for this reason.

2.3 explain the classification of elements as metals or non-metals on the basis of their electrical conductivity and the acid-base character of their oxides

2.4 understand why elements in the same group of the Periodic Table have similar chemical properties

Elements that are in the same group of the periodic table have similar chemical properties because they have the same number of electrons in their outer shell. The electrons in the outermost occupied shell (or shells) determine the chemical properties of the atom; it is called the valence shell.
Eg. Metals in the same group have the same number of electrons on their outer shell. This means they will behave in a similar way; they will react and bond similarly...

2.5  understand that the noble gases (Group 0) are a family of inert gases and explain their lack of reactivity in terms of their electronic configurations.

Group 0 (sometimes called Group 8) are called the Noble Gases, they are inert. These elements do not form compounds with other elements (most of the time). Helium is inert and is therefore a noble gas, however it is not always placed in Group 0. The reason for the lack of reactivity is the number of electrons in the outer shell of each atom. Helium and neon atoms have full outer shells, and the rest have 8 electrons in their outer shells. None of the atoms either gains or loses electrons easily.

Here are some exam practice questions relating to the topic above.

3. Elements of the periodic table that have similar properties are organised in to groups.
The following questions are about Group VII.
a) What name do we give to the Group VII elements?
(1 mark)
b) How many electrons do the members of Group VII have in their outer shell?
(1 mark)
c) What happens to the reactivity of the halogens as you go down Group VII?
Explain your answer.
(2 marks)
(Marks available: 4)

Answer outline and marking scheme for question: 3
a) Halogens.
(1 mark)
b) 7.
(1 mark)
c) It decreases,
(1 mark)
because the atoms of the halogens are getting larger as you go down the group so they are do not gain
electrons as readily.
(1 mark)
(Total = 4 marks)
(Nucleus of elements lower down does not attract electrons as much as the higher elements as the positive
charge is shielded by the inner electrons).

Or opposite statement referring to Group I metals.

Or opposite statement referring to Group I metals.
(1 mark)
(Total = 3 marks) 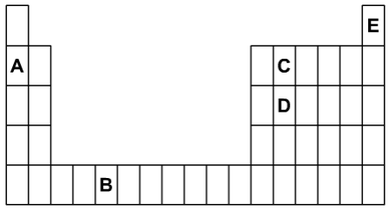 1. The outline below is of part of the periodic table. The letters shown represent some of the elements but they are
not the symbols of those elements.