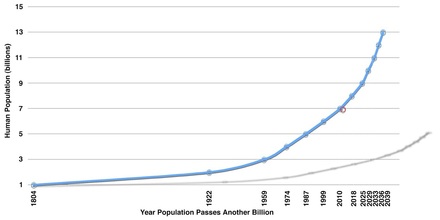 The population of the world is growing at a rapid rate. In 2008, there were just over 6.7 billion people living in Earth. Now in 2013 there are over 7 billion people. This is a massive increase. All these people require food, water and shelter. They are all born with ambitions, and will want access to technology, education and opportunities.
Many people are worried that the world's population is growing too fast. People have feared that that the world could become overpopulated.

How and why is population changing in different parts of the world?

9.3 Understanding how population changes over time 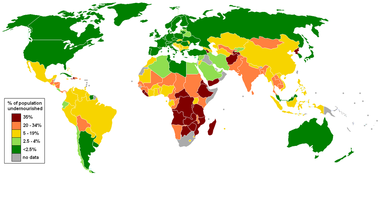 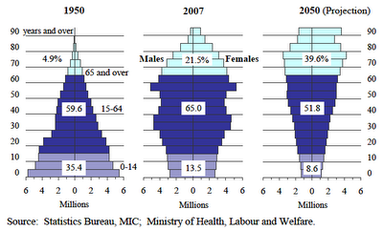 Why is Japan's population structure changing?
-People in Japan live longer. The average life expectancy is 79 for men and 85 for women. This is because of the healthy diets and good quality of life.
-Birth rate is declining because of the rise in the average age at which women have their first child.
-Japanese couples getting married has fallen, and the age at which people get married has risen, less likely to have a child at a young age as a consequence. This means it will take longer for babies to be born, thus worsening the Japanese problem.


What does this mean for Japan?
-An increase cost in pensions. More elderly people, living longer, will require pensions for longer.
-Fewer workers in the economy, so higher taxes needed to fund pensions.
-A rising number of elderly living in nursing homes.
-Increase in cost of healthcare, as more elderly people require medical treatment.

Why is Mexico's population changing?
- A low death rate
-Birth rate is falling
-Expected to take at least 50 years before the population structure of Mexico loses its Pyramid shape, and the population levels.

What does this mean for Mexico?
-A large youthful population requires an increase in school places.
-Large number of young people are unable to find work, so some migrate to the USA in order to find employment.
-There is a growing manufacturing industry to overtake the UK's and become the seventh largest economy in the world by 2050.
-Although Mexico is a strongly Catholic, abortion has been legalized in Mexico city in an attempt to reduce the number of abandoned children.

9.7 Population policies around the world

China, introduced the one child policy because its population was getting extremely high,  if it got too high then the population would be overflowed, meaning there wouldn't be enough resources for anyone. However, some families thought this policy was good, but for some it was bad news.
Pro-Natalist:  The policy introduced to make women have children because of a low, decreasing population, meaning bad economic growth. Women would be paid to have children, forcing more women to have children, as some people would do anything to get their hands on money.
Anti Natalist Policy: Is a policy to reduce the population growth. They encourage people to have fewer children, as their population is getting too high and unstable.
Impacts of the one child policy:
-The policy has been successful in preventing 300 million births. However, it has some more negative effects.
-Some people now believe that China's rapidly growing economy will not have enough workers to keep it going. If this happens , the Chinese Government may be forced to relax the one-child policy.
-There is an imbalance of men to women. Couples have often used illegal methods to ensure that their one child is a boy, as boys are traditionally more able to care for their parents when they are elderly.
Here is a news excerpt portraying one of the major effects of the one child policy:
(Copyright CBC. Video licensed for noncommercial educational use on the 999GCSEHelp domain only.)

Iran's Policy was:
Women are encouraged to wait 3-4 years between pregnancies and they are not allowed to have any children before they are 18 or if they are older than 35.
Families should be limited to 3 children and maternity leave benefits are restricted
Estonia's Policy was:
They introduced the 'mother's salary'.
Women are paid to have children
Working women receive 15 months' fully paid maternity leave, and non working women receive $200 per month
Case Studies

Migration in Russia:
Russia wanted all the migrants to come back to Russia, because their population was decreasing. They made policies persuading the migrants to come back, which was a huge success, as 6.5 million of those migrants came back to work in Russia.
UK:
Migrants move to the UK because we have better jobs, good housing, a good environment, good education, better standards of living from their country, where there might be war, lack of freedom and/or rights, natural disasters and racism and discrimination.