Climate has changed in the past through natural causes, on timescales ranging from hundreds to millions of years.

Past climate change on different timescales

This graph of average long term temperature change shows patterns of warm, cool and cold periods over the past 450,000 years. When the temperature is cooler, lower than 0° C, more of the earth is covered in ice. This is called an Ice Age or glacial. We are currently in a warmer period, known as an interglacial. 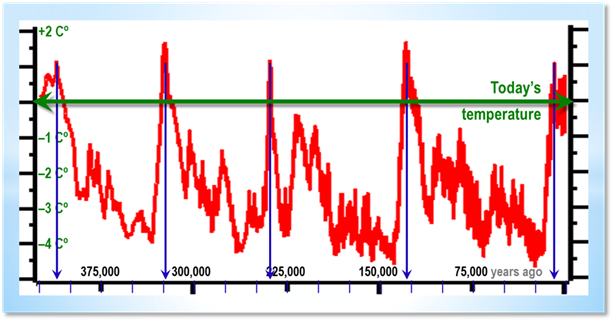 The quarternary period is a geological time period of the most recent 2.6 million years (from the present day).
The entire
Burning fossil

Climate change (along with some influence by humans) meant that megafauna (e.g. mammoths, giant beavers and sabre-toothed tigers) became extinct. Humans couldn’t kill all these creatures, so climate change and a lack of food played a large part in their extinction.

‹ Back to GCSE Geography Revision