In Of Mice and Men, Candy is paid just $250 by the boss, or five months' wages, for the loss of his entire hand while working on the ranch. Candy, a disabled character, is aware that he very soon he will be fired from work due to his him being unable to work as productively and efficient as the other ranch hands. In this context, Candy is trying to convince George to allow him to go with him to the dream ranch because, not only does Candy have the $350 to put the down payment on the farm, and he's willing to work at George's ranch since no one is going to help him, and in all likelihood, he's going to get fired soon.

"You seen what they done to my dog tonight? They says he wasn't no good to himself nor nobody else. When they can me here I wish somebody'd shoot me. But they won't do nothing like that. I won't have no place to go, an' I can't get no more jobs." 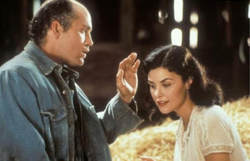 Lennie Small is a mentally disabled character in Of Mice and Men
People with mental disabilities in 1930s America were treated very unsympathetically by the majority of society. Abnormal behaviour and low levels of economic productivity were thought of as a 'burden to society'. Similarly, people of minorities were also treated badly by society (read the theme 'Racism in 1930's America').

​​The mentally disabled were usually placed by, or removed from, their families (usually in infancy) and housed in large professional institutions.

However, many of these facilities were 'self-sufficient' through the labour of the residents themselves. Heavy tranquillisation and assembly line methods of support were the norm. Services were provided based on the relative ease to the provider, not based on the needs of the individual.

​To understand the 1930's ideology, consider that society commonly thought that disabled people - the "feeble-minded" - should not have children and should be sterilised.

Just read this quote to understand the 1930's ideology:

In 1914, Harry Laughlin published a Model Eugenical Sterilization Law that proposed to authorize sterilization of the “socially inadequate” – people supported in institutions or “maintained wholly or in part by public expense. The law encompassed the “feebleminded, insane, criminalistic, epileptic, inebriate, diseased, blind, deaf; deformed; and dependent” – including “orphans, ne’er-do-wells, tramps, the homeless and paupers.” By the time the Model Law was published in 1914, twelve states had enacted sterilization laws.
​
-​ Paul Lombardo, 'Eugenics in the USA', 1930s

4/4: Mental Disabilities in Of Mice and Men

George is highly protective of Lennie because George wants Lennie, a mentally disabled person, to have a chance in life (John Steinbeck suggests). George tells him not to speak at the job interview because George is well aware of society's views and would rather Lennie prove his ability, and prove society wrong, through his work ethic. Was George right to do so? Despite the best efforts for a disabled man to have a chance, Steinbeck reminds the reader of the harsh reality of the time for the disabled. Steinbeck's book makes a clear statement to society in the 1930s: 'the only option is for Lennie to be put down, just as the dog was put down'. ​