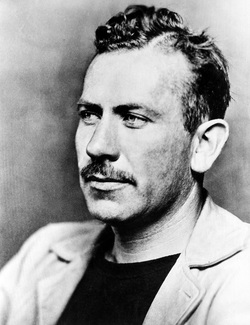 John Steinbeck was born in 1902 in Salinas, California, the region that Steinbeck chose for Of Mice and Men, and most of his novellas. To understand the context of Steinbeck's book, you need to know a bit about him.

Although he had a wealthy family, John Steinbeck was interested in farm labourer life and spent spent many of his teenage summers as a hired ranch hand (similar to George and Lennie). He saw for himself how hard the lives of the men were, later using his experiences at material for his novels. Together, the cruel bosses and cruel treatment made the men suspicious of each other. He saw how lonely they were. They slept in bunk houses and none were married.

In 1919, Steinbeck joined Stanford University, studying for six years before leaving without earning a degree. He went on to work as a reporter for five years before altering to a job as a caretaker for an estate, during which he finished writing Cup of Gold, his first novel, which he published in 1929. Cup of Gold, an adventure story, did not become a commercial or critical success until 1935 at which time he had published another novel, Tortilla Flat. Steinbeck was finally able to financially support himself entirely through his writing. In 1962, Steinbeck won the Nobel Peace Prize for Literature, six years before his death in 1968.

He saw for himself that the men’s lives were hard, that bosses were cruel and that cruel treatment made men cruel and suspicious of each other. He saw how lonely the men were. They slept in bunk houses and none were married. Steinbeck wrote many novels about poor people who worked on farmland and dreamed of a better life. The Grapes of Wrath was a the tragic and painful story of a family's struggle to escape the West's dust bowl to reach California.

Back to 'English Literature' for character profiles and more